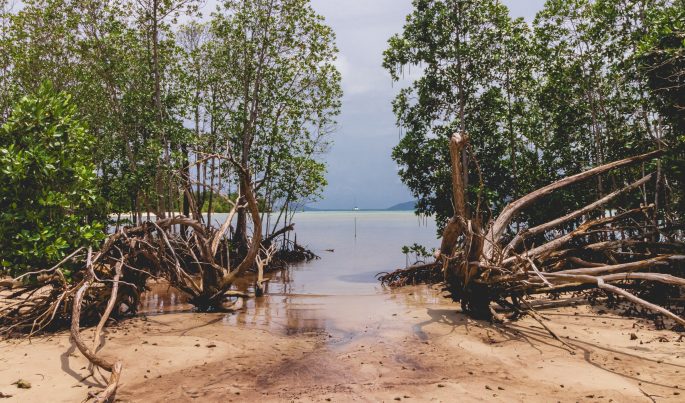 Across the Pacific, communities are using natural solutions to protect their vulnerable island states against the worse impacts of climate change.

“Small Pacific islands are particularly vulnerable and are very exposed to climate change,” says Herman Timmermans, manager of the Pacific Ecosystem-based Adaptation to Climate Change (PEBACC) project, funded by the European Union and implemented by the Secretariat of the Pacific Regional Environment Programme (SPREP) based in Samoa. “Atolls are especially at risk as they are flat and there is nowhere for the population to move to higher ground. Cyclones seem to be getting stronger each year, and the infrastructure on many Pacific islands such as power lines, water supplies, housing and schools are often exposed. The seasons are changing - dry spells are getting longer, and many islands don’t have dams or reservoirs to store water. They rely on rivers and small catchment systems which are easily damaged. Bush fires are also increasing.”

The conservation, restoration and sustainable management of forests, river basins, coral reefs, mangroves, and wetlands are increasingly seen as a cost-effective alternative to technological solutions to climate change.

In Fiji, villagers in Nawaka who live near the Nadi River on the west coast have been taking part in a pilot project to plant vetiver grass along riverbanks which have been eroded by flooding over several years.

In April this year the Samoan government achieved its target of planting two million native and fruit trees over a 5-year period. Samoa has planted 2,215,756 trees to restore land which has been deforested or degraded and so improve resilience. Farmers and communities took the lead both growing the young trees in nurseries and planting them out and Government-led tree plantings took place in National Reserve and National Parks. This successful campaign will increase Samoa’s forest cover, increase carbon sequestration, protect water catchment areas and biodiversity, as well as helping wood supplies and food security.

The coastal community of Nagoibo on Santa Isabel Province in the Solomon Islands villagers are planting mangroves to protect their village from the impact of erosions, wave surges and floods caused by rising sea levels and help lessen the impacts of tropical cyclones.

Mangrove coverage in Fiji is among the highest of all Pacific Island nations. These ecosystems store disproportionate amounts of carbon, provide critically important resources for communities, and protect coastal communities against the impacts of tropical cyclones. Dr Stuart Kininmonth,, senior lecturer at the School of Marine Studies at the University of the South Pacific, describes mangroves as an interface between the land and the marine environment. He says that mangrove planting in Fiji has been very successful as long as it is done in the right location, with the right species and at the right time.

“In addition to coastal protection against storm surges, cyclones and sea level rise, healthy mangroves provide fish, firewood, building materials, they are home to a wealth of biodiversity and they absorb up to four times more carbon than other types of forest,” says Timmermans.

Nature-based solutions are not just good for people, they make strong economic sense as well. One study estimates that globally, intact mangroves prevent US$82 billion in flood dam-age every year. They are also often cheaper than hard infrastructure. “Sea walls may be successful in combatting coastal erosion in the short term, but they tend not to last very long and they may have adverse environmental impacts and disturb the natural ecosystems,” explains Timmermans. “Nature-based solutions are a no-regrets, good value for money approach - that’s a major consideration in poorer countries.”

For some communities, nature-based solutions may be the only financially viable alternative. On Choiseul in the Solomon Islands, rising sea levels and coastal erosion are major problems but building sea walls or dykes is not an option because of both the cost and lack of resources. Instead, coastal rainforests are protected through a programme partly funded by the EU in which indigenous landowners voluntarily give up their rights to logging in exchange for the opportunity to create and sell rainforest carbon offsets.

“Low lying islands are in a really serious predicament, but I am optimistic. Nature-based solutions can help island communities to become more resilient,” says Timmermans.