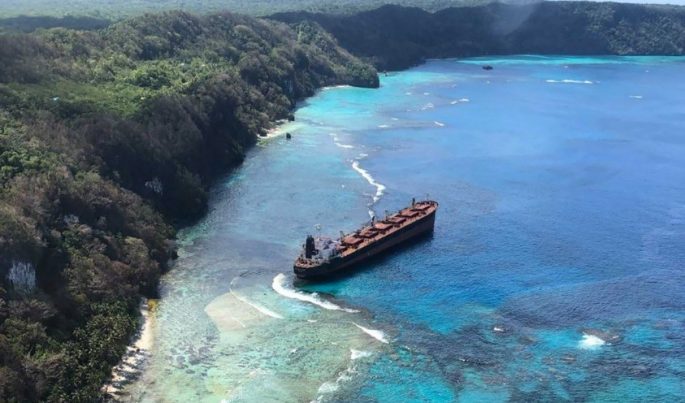 Pacific News | Oil Spill in the Solomons is an Ecological Disaster

For over a month, a cargo ship has been leaking heavy fuel oil into the waters of Rennell Island’s Kangava Bay in the South Pacific, home of the world’s largest raised coral atoll and a UNESCO World Heritage site. The oil spill from the ship Solomon Trader, a Hong-Kong registered bulk-carrier which was loading Bauxite at Lughu Bay in West Rennell, has released 80 tonnes of oil into the sea, but 650 tonnes remain aboard.

The spill has had a significant impact on the lives of more than 300 people residing along the coast of the bay who are no longer be able to have fresh fish for food. Local communities have also been cut-off from sourcing their fresh water from nearby streams due to contamination by the oil. Oil fumes are also proving to be a problem causing as villagers to experience sleep deprivation.

“During the day it’s okay but when night comes, we have hard [a] time breathing due to the bad smell from the spilled oil. Some people, including children, have fallen sick due to this odious smell,” said Chief Raymond Sau of Avatai village in West Rennell. According to Simon Albert, a marine ecologist at the University of Queensland, the spill is likely to cause long-term, significant damage to the coral and the local ecosystem. When coral comes in contact with oil, it can either kill the coral polyps directly or affect reproduction, growth and behavior over the long term. Already, many fish have been seen dead at the surface of the water.

The Solomon Islands reached out to Australia asking for assistance in mid-February. Australia sent consultants and aided in aerial reconnaissance of the spill, but determined that more was needed to stop the catastrophe. The accident is the first of its kind in the remote Rennell-Bellona Province and has highlighted some significant challenges to the Government, including issues relating to the limited domestic technical capacity in dealing with the situation and limited resources for deployment of the On-site Coordination Centre (OSOCC).

Officials estimate it will take at least two months to salvage the Solomon Trader. “We needed much speedier action in response to what is potentially a very significant natural disaster," said Anne Ruston, Australia's Minister for International Development and the Pacific. “We would have liked to have seen that the operator and their necessary insurers were a little bit quicker to respond to what was happening, instead of leaving it up to Australia and the Solomon Islands to respond.”