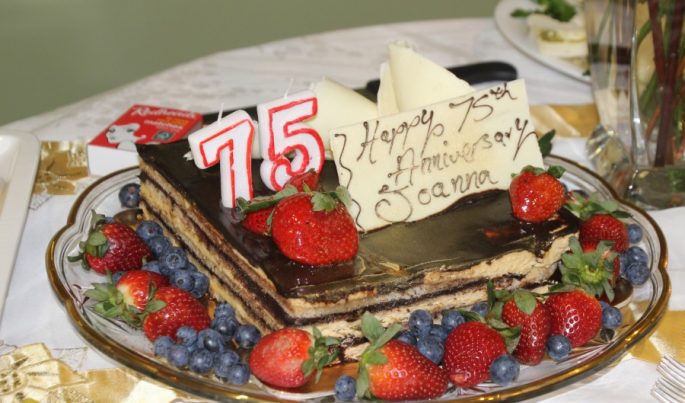 The 15 August this year marked the 75th anniversary of Joanna Waite’s dedication in the Nucleus of The Grail. What a great excuse for a special celebration! On the day itself, the other Nucleus members travelled to Melbourne to spend some hours together with Joanna, first over lunch and then in grateful prayer and reflection on the Gospel of the day – the account of Mary’s visit to her cousin Elizabeth and Mary’s Spirit-filled Magnificat.

How timely that Crescentia Lementi, the only Nucleus Grail member in Papua New Guinea, was with us to share our joy in Joanna’s life of love and fidelity. Andrea Venier had organised a gathering at the Eva Tilley Retirement Centre on the previous Sunday afternoon when members and friends of Joanna expressed their deep appreciation of her.

Here is Andrea's summary of the celebrations:

The afternoon tea in Joanna’s honour at Eva Tilley Retirement Centre on Sunday, 13 August, was a lovely ‘gold-themed’ gathering. Along with the local and visiting Grail members were some close friends of Joanna and The Grail in Melbourne - Mary McCormick, Denise de Gruchy, Joy Beer, Cecily Johns and Janet and Leo Kelly.

The occasion included a time for reflection and sharing of anecdotes of Joanna’s past in ‘Ballybrac’ Mackay, in ‘Tay Creggan’ Melbourne, and in South Africa, as well as appreciative testimonials. We have gathered photos of Joanna over the years and Mary Anne took some lovely shots on the day. These will all be organised in an album for Joanna.

Joanna was presented with a ‘tree of life’ pendant on behalf of all the Australian members.

We thank you, Joanna, for your years of dedication and inspiration to us all!