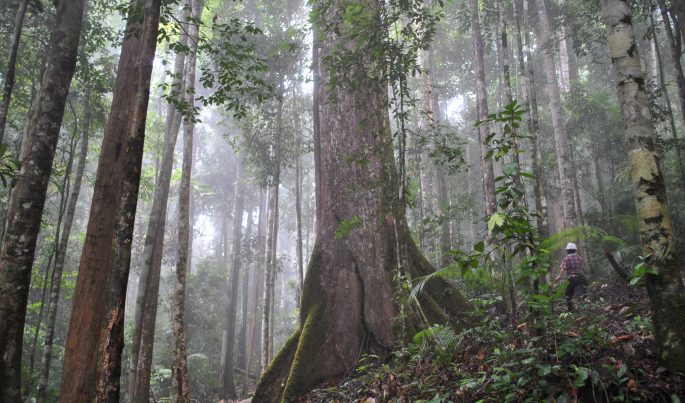 Papua New Guinea (PNG) is home to the world’s third largest tropical rainforest and the largest remaining tropical rainforest in the Asia-Pacific region, but Indigenous communities across the nation are seeing their livelihoods and environment destroyed as ancient rainforests are cut down by foreign-owned logging companies.

People throughout PNG have been illegally stripped of their land by their own government. Widespread abuse of a land-leasing scheme has seen 12% of the country given away to mostly foreign-owned logging and agribusiness interests, such as palm oil production, for up to 99 years. This is in addition to the millions of hectares already allocated by the government for logging, which means that one third of the country has been in the hands of foreign – mostly logging – companies.

Since the 1980s Members of Parliament have maintained lucrative relationships with logging companies (mainly Malaysian and Chinese). Permits are granted illegally and locals often terrorised into handing over land rights.

Most timber is felled under the Special Agriculture and Business Leases (SABL) system, implemented in 2009. Since 2009 about 6.3 million cubic metres of rainforest logs worth over US$1 billion have been exported from PNG under SABL, and very little money or benefit has gone to local communities. According to the Environmental Justice Atlas 70% of logging in PNG is illegal.

The previous government under Peter O’Neill promised for years to cancel the SABL system, after an independent inquiry reported in 2014 widespread violations of indigenous land rights: only 4 out of 42 leases investigated had received the proper consent of landowners.  In March 2019, the Lands Minister announced that 3 million hectares of land under SABL had been given back to customary landowners.  This, together with another lease of 970,000 hectare in a court case, leaves less than 25% SABL land still controlled by leaseholders.

Stained Trade, a 2017 report by Global Witness, shows how the global timber trade is driving deforestation. Most rainforest logs exported from PNG are shipped to manufacturing hubs in China, with smaller amounts going to other countries including India, Japan, South Korea, and Vietnam. Finished commercial products made in China are sold domestically or exported around the world, including to the United States, Europe and Australia.

Stained Trade reveals how companies along the supply chains for wood products are failing to screen out illegal timber, and the devastating impacts the trade is having on people in PNG.

The US, Europe and Australia have laws in place prohibiting imports of illegal wood, and in July 2020 China’s amended forest law came into effect. It includes a ban on buying, transporting and/or processing illegally sourced timber. While the law stipulates that “no operator or individual may knowingly purchase, process, or transport timber of illegal sources,” it leaves a loophole for an operator to claim lack of knowledge.

Global Witness investigators traced the path of one of PNG’s most commonly exported species, taun, from its arrival in China at huge timber ports on the Yangtze River, to the sawmills and manufacturers of Nanxun, the country’s largest solid wood flooring hub. Global Witness found that certain American and Chinese companies were selling taun flooring without taking the necessary steps to ensure it was legal. According to From a forest in Papua New Guinea to a floor in Sydney by Helen Davidson in The Guardian, 1 June 2021, some Chinese buyers believe that the fact that the timber has been able to leave PNG is proof that its trade is legal.

Stained Trade recommends that the Chinese government put in place measures requiring all timber importers to carry out due diligence to ensure the wood they import is produced in compliance with all applicable laws in source countries, including those related to land rights.

In 2020 the PNG Forestry Minister said that all exports of round logs will be banned by 2025. The news sounds promising, but Kingtau Mambon says in his recent blog for Act Now, PNG round log export ban: Plagued by poor political will that there were government plans to ban round log export back in 2010, and since then PNG’s log exports have only increased, making it the world’s largest exporter of tropical round logs. The current government supported the previous one in 2020 in its goal of banning round log exports, but the ban has now been extended five years to 2025.