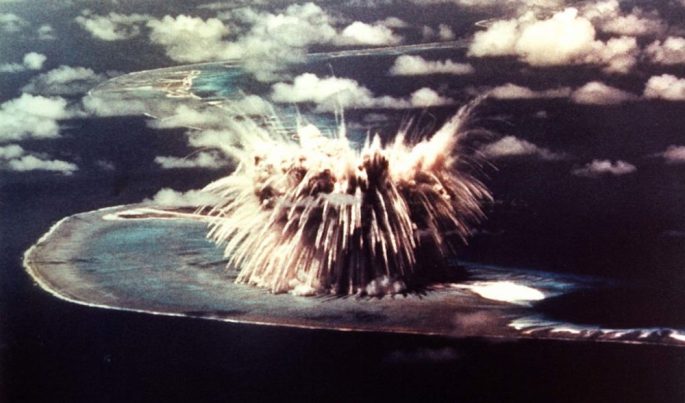 The Marshall Islands consist of 29 atolls and 5 isolated islands in the North Pacific Ocean, about halfway between Hawaii and Australia. From 1946 to 1958, the United States detonated 67 nuclear bombs in the region – some of the largest atomic weapons tests in history. Four of the remote Enewetak Atoll’s 40 islands were completely vaporised by the tests, with one thermonuclear blast leaving a two-kilometre-wide crater where an island had been just moments before. To this day, only three islands along the atoll’s slender rim are considered safe enough for human habitation.

In the aftermath of these violent tests, with widespread radiation sickness being reported across the Marshall Islands, 85,000 cubic metres of radioactive soil and debris were dumped into a nuclear crater on Enewetak Atoll. The crater was capped with cement in 1980 and is officially called the Runit Dome. Some of the debris buried beneath the Dome includes plutonium-239, a fissile isotope used in nuclear warheads, which is one of the most toxic substances on earth. It has a radioactive half-life of 24,100 years. However, as sea levels continue to rise due to the increasing effects of climate change and contaminated marine life is discovered, the integrity of the Dome is being called into question.

As part of the clean-up process, the United States set aside funds to build the Dome as a temporary storage facility, and initial plans included lining the porous bottom of its crater with concrete. But in the end, that was deemed too expensive. As far back as 2012, a United Nations report found that the effects of the nuclear tests were long-lasting, which was followed by a 2013 US Department of Energy report which found radioactive materials were leeching out of the Dome, threatening the already tenuous existence of Enewetak locals. A single cyclone is all it would take to break open the Dome and cause all of the radiation in it to disperse.

Giant clams, a delicacy in the Marshall Islands, have now been found to contain high levels of plutonium. According to Dr Terry Hamilton of the United States Department of Energy, "While they're eating [the clams] they're just not eating sufficient [amounts to be] causing any sort of discernible effect on the levels of plutonium in their body," he said. Despite this, local leaders say that people remain fearful of eating contaminated local produce. In fact, the traditional subsistence lifestyle of the region has now shifted to one relying heavily on imported canned and processed goods, triggering health issues such as diabetes.

Marshall Islands Senator Jack Ading argued that "[The United States] has a history of underestimating the risks created by the contamination of our islands. We have too much at stake to rely solely on the information provided by the US."

This sentiment was reaffirmed during UN Secretary-General Antonio Guterres' visit to the Pacific in May. He spoke to students about his deep concerns over the impacts climate change could have on the structural integrity of the Dome. The Secretary-General of the Pacific Islands Forum, Dame Meg Taylor, recently called for an independent audit of the site.

When speaking to ABC News journalists about the Dome, the head teacher at Enewetak’s only school, Christina Aningi, explained -  “We call it the tomb. The children understand that we have a poison in our island. If it does [crack] open most of the people here will be no more."