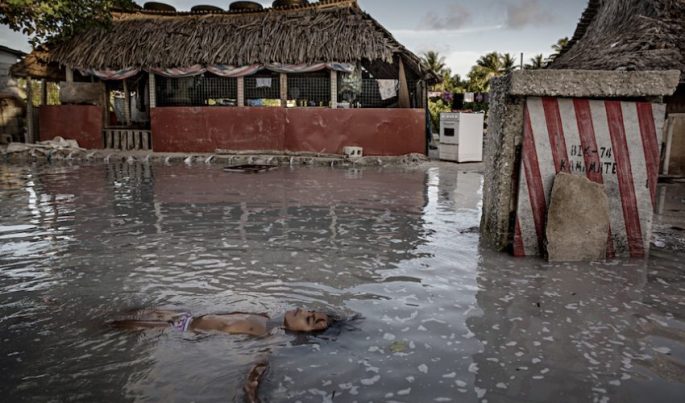 Pacific News | The Faces Behind the Fight: Why Climate Change is Personal

Unless we’re in the grips of an extreme weather event, climate change can seem like a very distant issue for people living in developed countries. In sharp contrast, the effects of dangerous climate change are often keenly and intimately felt by those living in the Pacific Islands. It’s not just political or environmental – it’s deeply personal. Nowhere is this truer than in the nation of Kiribati (pronounced 'Kiri-bass').

Kiribati has a population of 100,000 spread across 33 coral atolls located halfway between Hawaii and Australia. This archipelago nation has an average elevation of just 6 feet above sea level, making it particularly vulnerable to even the smallest rises in sea-level. According to former President of Kiribati, Anote Tong, while the rest of the world ignores the gradual onset of climate change, the lives of Pacific peoples are already being drastically affected.

"When I gave my first address at the United Nations General Assembly in 2004, climate change struggled to attract international attention away from the global focus on terrorism. But I had no hesitation appealing to the world about the issue that mattered most to my people. I did not have the luxury to ignore this problem."

Residents of Kiribati spoke openly to correspondents from CBS News about the ways in which climate change is affecting their daily lives, including high tides that inundate their homes and contaminate their water and kill their crops. They’re also impacted by the constant erosion of their precious land. Ironically, these communities have some of the lowest carbon footprints in the world.

The Prime Minister of Tuvalu, Enele Sopoaga, has stated that there was no subject more important than climate change to the people of the Pacific. "This is an issue about our existence... climate change threatens our very identities," he said.

According to Samoan journalist Lagipoiva Cherelle Jackson, "Every year there is some sort of an event, whether it be prolonged dry season which throws all our crops out of whack, a cyclone that we could only prepare for 24 hours, increased rainfall and flooding that surprises us in the night, killing our children and robbing us of our homes. This is our normal, you are watching our normal in the news, the things you see in America, from Cyclone Irma and Cyclone Harvey, that’s our way of life."

Jackson sums up the personal nature of climate change eloquently, "Climate change is real, it happens in the lives of every Pacific Islander in one way or another, the experience is so raw and so direct that one doesn’t have a choice but to understand its causes and why it is becoming so frequent. Unlike our learned counterparts in developed countries, we don’t have the luxury of denial…"

This article originally appeared in Issue 5 of the Pacific Outlook Bulletin.

On a Pacific island - we don’t question climate change, we live it, The Huffington Post, Lagipoiva Cherelle Jackson, 17 September 2017

Feature Image: Young girl lies on her back in seawater that has flooded the village street in Eita, Kiribati © Jonas Gratzer/Lightrocket via Getty Images

Kendall is a sustainability advocate and digital marketing specialist who has driven the communications campaigns for a range of non-profit organisations focused on ethical fashion, sustainable consumption, and wildlife conservation. Kendall is the Administrative Assistant at The Grail Centre in Sydney, as well as coordinating the digital marketing for Good Environmental Choice Australia (GECA).