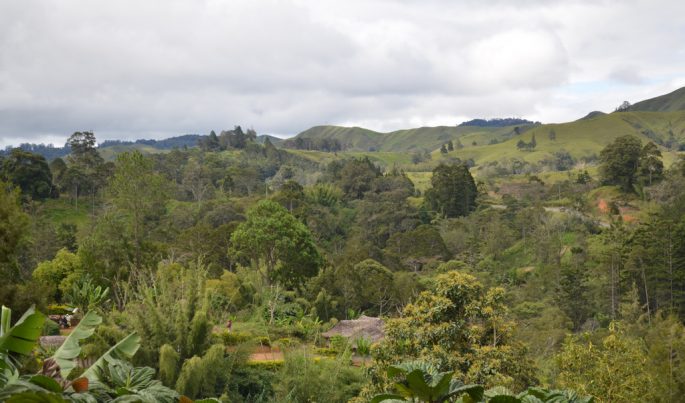 In part one, we looked briefly at the troubling increase in homelessness and violence against women and children in the Highlands of Papua New Guinea (PNG) following the magnitude 7.5 earthquake in February. The estimated death toll from the quake is 100, although some reports place it as high as 150.

Unfortunately, the situation continues to be dire, with the destruction of homes and essential infrastructure compounded by tribal fighting in the area. According to the PNG government, more than 500,000 people were affected by the quake, 270,000 of whom still require immediate aid.

Damaged roads are inhibiting access to remote communities and broken power lines are affecting crucial power supply to local health care centres and schools. Unable to return to their classrooms, students throughout the region must now fit into large local mess halls as an alternative space, while they wait for their schools to be rebuilt. Access to clean drinking water has also become an urgent concern.

The water supply at Pombreal Village, in the remote Southern Highlands, for example, has run dangerously low in the months since the earthquake struck in February. Landslides have contaminated a nearby creek, and now the entire community, some 600 people, relies on a single 5000L water tank. The community must ration the little water they have left, just a quarter of a cup for each child per school session.

One ray of hope for the village is the establishment of a UNICEF Education Programme run by Program Volunteer, Judy Olpis. She teaches the local children the basic principles of hygiene and provides them with a much-needed sense of normalcy. Her example has inspired Maxwell Konop, the Chairman of Pombreal Primary School, to support the construction of a new pit latrine toilet, a set of taps for hand washing, and two additional 5000L water tanks.

The International Committee of the Red Cross (ICRC) and the Papua New Guinea Red Cross Society (PNGRCS) have also been working with the Highland people to assist in the rebuilding and rehabilitation of their communities. Over the past few months, the ICRC have provided shelter and emergency household kits to 16,000 displaced people. They have also installed water harvesters and replaced tanks to ensure that people have access to clean water.

Aid efforts have been hampered, however, by continued tribal violence throughout the region - forcing many aid agencies to suspend their efforts in some areas.

"In some cases, you might have people who have been displaced into in an area where there is a dispute over ownership of the land," Ahmad Hallak, ICRC Head of Mission in PNG said. "That's definitely a challenge, that's something to keep an eye on. And as time passes, if some of these displaced communities do not return, it's likely that it would aggravate tensions between them and some of the host communities."

Earlier this month, dozens of local councillors from districts in the Western Highlands came together to sign a series of guidelines on tribal fighting. The rules were signed in the presence of hundreds of people in Tambul-Nebilyer district, after being drafted with the support of the ICRC. The guidelines include avoiding the targeting of civilians and the destruction of civilian property during tribal fighting.

"It remains to be seen how effective this will be, and to what extent it will reduce the consequences of future tribal fights if they do occur," said Hallak. "But it seemed to be received quite well."

Papua New Guinea: How the Highlands are coping after devastating 7.5 magnitude quake, International Committee of the Red Cross, 7 June 2018