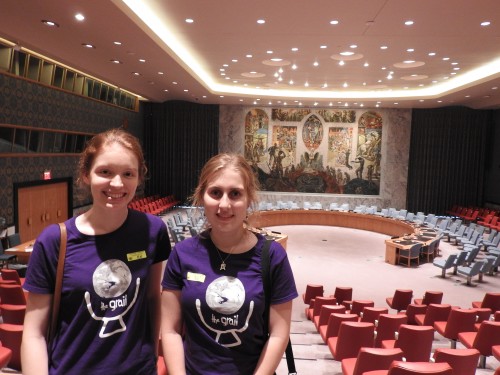 Twenty young women from nine countries spent three weeks at the Grail Centre in Cornwall, New York in July 2015 in an intense residential program formed around the core principles of the Beijing +20 Post-2015 platform of the United Nations Commission on the Status of Women (CSW).

They return better prepared for advocacy within their own communities and countries, and connected to other young women through the relationships formed during the Sacred Activism summer program.

Amongst them were two young women from Australia, Jo Vidler and Ailsa Paterson (pictured).  Below are their reflections on the program.

The program introduced us to the concept and reality of sacred activism through sessions facilitated by many inspiring women, each with different experiences and a unique perspective on what it means to be a ‘sacred activist’.

Ailsa particularly enjoyed the sessions on Women and the Environment, led by Joy Garland and Trina Paulas, and Women and the Arts, led by Sharon Thompson. I found the session on The Girl Child particularly inspiring as it demonstrated the importance of hearing the voices of young women and girls in our national conversations. We approached these topics from a global perspective through the prism of the UN frameworks such as the Sustainable Development Goals, the review of the Beijing Platform for Action and the Commission on the Status of Women. For me, this global perspective reinforced the need for solidarity, particularly amongst women. This, of course, is embodied in the work of the Grail, something I learned very quickly from the wonderful community of young women who had travelled from all over the world to participate in the program.

The twenty participants came from 9 countries and although we differed in language and culture, we created a shared vision of change and I know that we now have the inspiration and the community behind us so that we can manifest this vision in our own communities. This was a truly rewarding experience and I would like to thank both the International Grail and the Australian Grail for making it possible.

When I walked in the door at the start of the day my knowledge of the UN was limited to a dictionary definition: a worldwide organisation dedicated to peace and prosperity.

While I had heard of the UN from school and previous speakers throughout the program, being physically present at its headquarters was an awe-inspiring and informative experience. However, I think that the essence of the day was about perspective. Our perspective overrules our perceptions of ourselves and of others, and in the case of Grail women our perspectives are a major part of our sacred activism.

Sometimes our perspectives are clear, and sometimes we need another to help us to see things in a new light. Being able to walk through the UN buildings, seeing the people and spaces that make so much difference for so many people changed the way I saw my own sacred activism. Before this program my view and experience was limited almost exclusively to the Grail in Australia, after this visit I am able to see the world on a much grander scale, and I realized that the issues we face in Australia are spread universally across the globe.

Upon the conclusion of the program, after three weeks of discussion and after meeting so many wise and inspiring people from across the globe, on the last day I was asked; “what will you take away from this?”

There is no short answer, but when asked again by the Brisbane Grail to answer this I tell this story I learnt from the UN. When tasked with the job of designing a flag for the United Nations, the designers knew that they wanted a map of the globe with all of the countries visible. Contention arose when delegates argued over which continent would be depicted in the centre, as in traditional maps. The solution was reached when the designers looked at the globe from a different perspective, viewing it from above, one that would depicts all countries while also placing on one country in the centre. The same practice can be implemented by individual Grail members in their work. Learn to see the facts and issues from a different perspective and you just might find an answer.

Ailsa and Jo’s participation in the program was made possible by the International and Australian Grail. They would like to thank both for this generous sponsorship and wonderful opportunity.